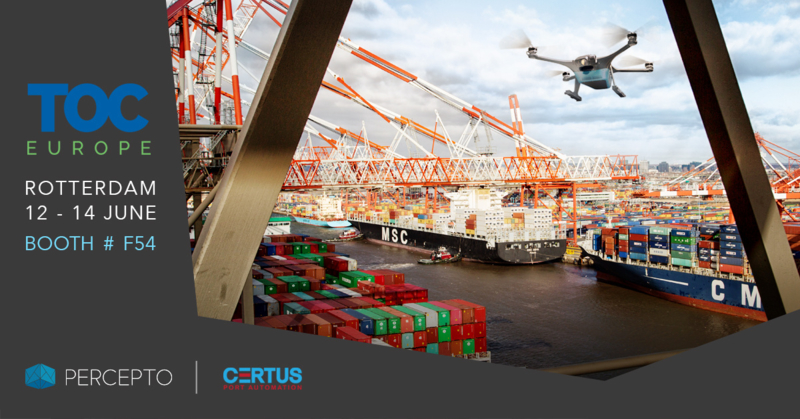 Rotterdam, The Netherlands – June 6th, 2018 – Percepto, developers of on-site autonomous drone systems, and CERTUS Port Automation, providers of port automation and security solutions, announced today a strategic partnership introducing the deployment of autonomous drones in maritime ports and container terminal environments. Both companies recognize the added value that autonomous drones bring to this industry and have worked on their technology integration to provide comprehensive solutions.

Percepto’s Sparrow drone uses computer vision and AI technologies to conduct security, safety and inspection missions, collecting and analyzing valuable data in real-time. The system identifies anomalies and can send alerts to relevant personnel, pinpointing both location and the nature of the problem.  The drone is fully autonomous, eliminating the need for operators, and can fly on pre-programmed routes around the clock and in almost all weather conditions.

“We see a growing need for deploying new sensor technology that enables our global customers to retrieve business and security-critical information even beyond the borders of ports and terminals. With Percepto, we’ve found a partner that is an industry leader in this technology and offers full integration of their autonomous drone system with the CERTUS solutions portfolio,” said Leander de Nooijer, President of CERTUS Port Automation. “Optimizing gate and waterside processes, as well as increasing supply chain visibility, starts with gathering as much information about the cargo (e.g. containers) at the earliest stage possible.  The use of drone technology combined with our cutting-edge recognition solutions will open a new world of possibilities.”

“Maritime ports and terminals are an exciting new arena with unique requirements that an autonomous drone system can resolve. Percepto is excited to be partnering with CERTUS to make our customers, some of the busiest ports in the world, as efficient and safe as possible while enabling them to maximize resources,” said Dor Abuhasira, Co-founder and CEO of Percepto. “Our mutual collaboration is indicative of how easy it is to adapt our platform for use in numerous industries.”

Founded in 2014, Percepto is pioneering the use of commercial drones in industrial environments. Percepto’s on-site drone system operates autonomously without human intervention. It is also capable of performing multiple security, safety and inspection missions around the clock. As a long time supplier of real-time machine vision and AI technology to the defense industry, Percepto now offers its unique set of capabilities to commercial markets.  For more information, please visit us at:  http://www.percepto.co

CERTUS Port Automation is a leader in the fields of OCR, image processing and software development. CERTUS solutions optimize port- and terminal logistic and security processes through automation making them more efficient and cost-effective. CERTUS solutions are deployed all across the globe, through our own Professional Services organization and through a global partner network. For more information, please visit us at:  http://www.certusportautomation.com